Tierneys is a friendly, traditional Irish Pub that has been serving its customers since 2009 and can be found not far from the historic Grote Markt (town square) of Haarlem 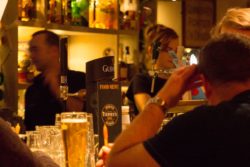 Tierney’s offers eight draught beers, including excellent Guinness and other Irish beers as well as Dutch and Belgian varieties, including the local Haarlem-brewed Jopen beer. There is also a good stock of bottled beers, including a strong selection from Belgium. Cider also figures on the menu, from the bottle and on draught, and there is a wide variety of non-alcoholic beverages.

Tierney’s also stocks a full range of international and domestic Dutch spirits, but is particularly proud of its large, expanding whiskey collection (nigh on a hundred and fifty different brands!) which includes blended whiskeys and single malts from all round the globe, including some exotic and surprising locations. Why not try a few of the more unusual ones to see what you have been missing all these years! For the devotees there is also a Tierney’s whiskey club you can join which offers discounts and other advantages. Just send a message to request more information. The pub was set up by the brothers Paul and PJ Tierney, who have many years of experience in the bar trade, both in Ireland and in other countries, so it was no surprise that after a time working in Haarlem they decided to set up shop themselves. They believe in mixing the best of traditional service with the wishes of modern pub goers. They also wanted to promote Irish music and immediately set to organising the now twice-monthly traditional music sessions.

Both are keen sports fans and in particular like the rugby and gaelic sports. Many Irish visitors will be delighted to know there is a place in Haarlem where live rugby and hurling or gaelic football can regularly be seen via satellite, if necessary from behind a perfect pint of Guinness.

The pub’s philosophy is that service in the bar should be friendly and swift. All our employees do their best to meet the customers’ demands.

The name Tierney comes from the Gaelic O’ Tighearnaigh, which translates roughly to male descendant of Tighearnach. Tighearnach means lord or master.